Announce your home for sale

The Spanish Government extends the restriction on flights of British citizens which are not residents in Spain until 2nd March
Only Spanish or Andorran citizens may travel from the United Kingdom to Spain.
Or British citizens that are residents in Spain or Andorra.
This measure will be extended from 6:00 p.m. on February 16th until 6:00 p.m. on March 2nd 2021.
This is the fourth time that Spain has extended its restrictions on arrivals from Britain.

From 3p.m. on Friday, February 5th, 2021 to 6:00 a.m. on Monday, February 8th, the main accesses to Torrevieja will be closed due to the perimeter closure decided by the Generalitat to reduce mobility and the spread of covid 19.

The 4 main entrances to the city of Torrevieja will be controlled by the Local Police and the Civil Guard to guarantee the perimeter closure of the city.

The vehicle entry and exit controls will be located at:

The 6 access roads to the city will also be kept closed with barriers, in order to redirect vehicle traffic to the police checkpoints.During the past weekend, a total of 125 controls were carried out, identifying 7,534 cars which resulted in 72 fines for violating the prohibition of the perimeter closure. Around 700 vehicles that tried to enter Torrevieja had to turn around and return to their places of residence.

26th January 2021 The Spanish Government has today extended the present travel ban on flights / ferries carrying anyone from the UK except Spanish Nationals and foreigners with full Spanish Residencia (TIE card or the old style green Residencia card or certificate) for a further 14 days, until at least 1800hrs on the 16th February 2021 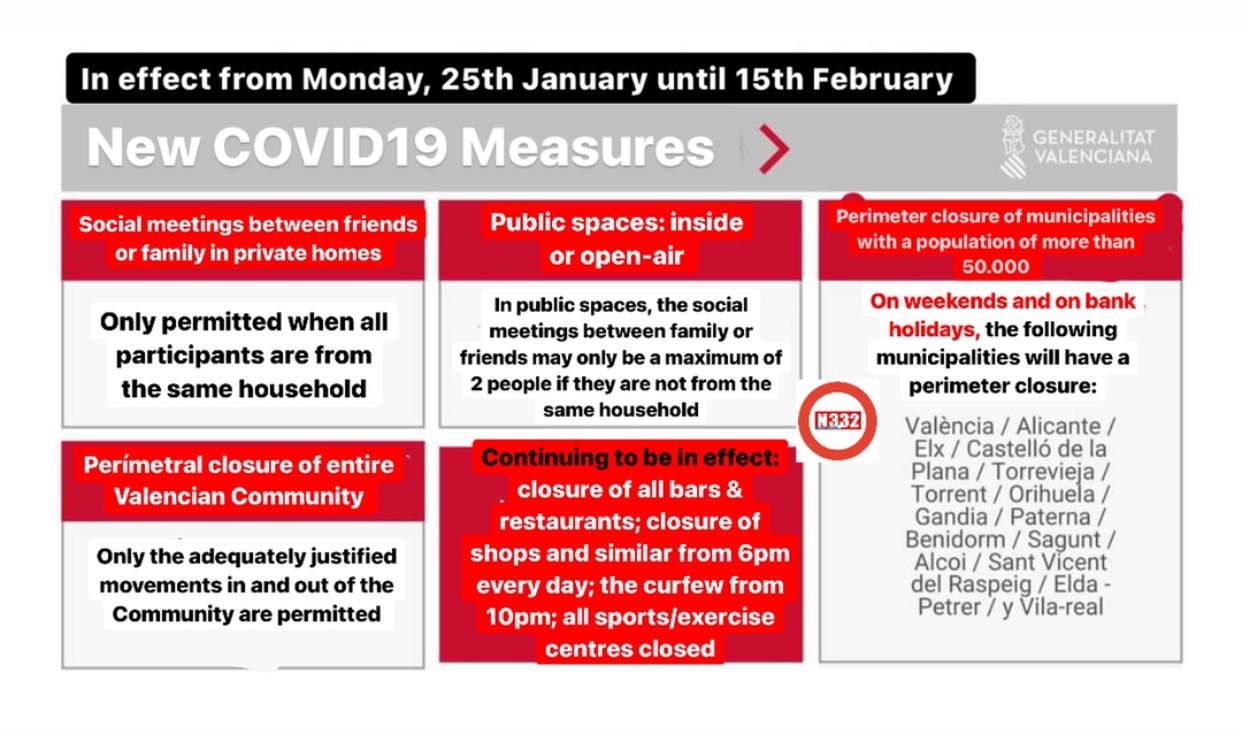 23 January 2021 ERTE extended until May 31st 2021
The Government agree to extend the ERTE (Furlough scheme in Spain) until May 31st. This is the third extension reached by consensus to provide protection to workers and companies facing the exceptional circumstances that are occurring due to the pandemic.
The flexibility of the current model is maintained and processing is simplified.
In addition, the Executive has also reached an agreement with the main associations involved with those that are self-employed. The objective is to guarantee until May 31st the aid in place, to alleviate the effects of COVID-19

The agreement involves the extension of current benefits, with slight modifications

These new measures will be implemented from this Thursday, January 21st, and will be in force until January 31st.

Closure of all hospitality businesses in the Valencian Community. Takeaway/pick up food service will be permitted.

Closing time of all shops & non-essential businesses from 6 pm every day, except for food establishments (supermarkets and similar), pharmacies and other essential establishments.

Closure of all sports facilities, except for professional athletes.

**EDIT** THE CURFEW CONTINUES BEING FROM 22:00. THE PROPOSAL MADE TO THE CENTRAL GOVERNMENT TO CHANGE THE START TO 20:00 IS YET TO BE APPROVED.
The other restrictions in force (such as the regional perimeter of the Comunidad Valenciana or the maximum of 6 people in the meetings) remain in force until January 31st as planned.
Also, the perimeter closure of the 29 municipalities that were confined on January 7th will end.

Receive an email every time we have a property new to the market.

Receive an email every time we have a property new to the market.
Click Here

We can help you visit & view properties we have for sale in The Costa Blanca.

We can help you visit & view properties we have for sale in The Costa Blanca.
Click Here

Give us a bit of information below to get your personal Property Valuation. We will be in touch with you, very soon!